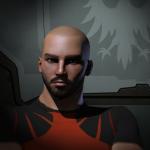 Thanks guys for the EPIC and LEGENDARY fanfest! Was truly a blast as DV said!

This week the following medals were given in Red Federation:

Sigil of the Fifth Horseman was given to macgyver 3rd for achieving 4000 kills!

Liquid Pwnzone was awarded with the Order of the Apprentice Cat Herder for stepping up to FC and continuing doing it ever since.

Oh cool, I can also get a pirate ship!

What about the pub crawl? Are we planning to go to the same "team" or just pick one at random? I guess there might be one with Foxfour that is sliiightly designed for RvB.

Huh, so many nice shinies have been given on Blue side of RvB. Let's see what the members of the Red Federation have been doing this week:

Metaloid was awarded with the Order of the Red Baron for 1000 kills. But that is not all folks, he was also awarded the Medal of the Immortal for landing a juicy pod kill on a WT a while ago.

Darth Killius was also awarded with the Order of the Red Baron for achieving 1000 kills.

The biggest shiney of this week goes to RageChild, who was awarded with the Lion of the Red federation for achieving a whopping 3000 kills!

I'll be in Reykjavik from January to May. Staying at loki101 guesthouse, which is 1km from Harpa.

Booked only the pub crawl + fanfest. Will be swimming in the blue lagoon in 3 weeks

Got accepted to the University of Iceland for the spring semester. Fanfest here I come \o/

Badge of the Terminator