1v1 Event: King of the Grid


1 reply to this topic

Two players warp to a referee on grid, fighting until death, the winner becomes "King of the Grid"

The KotG continues to remain on field without reship or rearming, and fights a series of 1v1s until he dies. His killer then takes over as the new King.

The event winner is the person with the most consecutive kills before death,

2nd place goes to the final owner of the grid when the event ends if a different player, or the person with the highest number of non-consecutive kills.

-To keep things orderly there will be a fleet officiated by a Command Team Member, who will keep tally of killmails and manage the qeue of fighters.

-The referee will announce who will warp to the arena and who is next in line. Then the fight begins, and ends, and the next person is called up to enter the arena and the loser drops fleet until they have reshipped and returned to the qeue (if they choose).

-To minimize downtime and include non-active tank fittings in the contest, the referee will be fit with remote shield/armor/hull reppers which will be used on the winner between fights, and can give up to 25 nanite repair paste only to the winner each round. No docking, rearming or repair other than remote reps and paste repair is allowed.

-If requested prior, I will set up a container with requested sizes of cap booster charges and ammo for winners access and use only, not for plundering.

-Must be on comms. This will make life easier for everyone.

-Clean Clones only, or learning implants or 1-3% power grid or  CPU implants, with no other effect, no drugs

-Only T1, T2, and Meta Modules, no Faction, Deadspace, or Officer modules of any kind.

-Only T1 Rigs are allowed, no T2 Rigs

-Only T1 or T2 Drones are Allowed, no faction/augmented etc.

-Propulsion modules of all sizes are allowed.

-Only one Buffer or Active Tank Module is allowed on each hull, not including rigs,  including: Armor repairers, hull repairers, shield boosters of any kind, armor plate, bulkhead, or shield extenders (any type). You may fit as many or as few resistance modules of any kind you choose. Clarification: No ship may fit two plates, two bulkheads, two Shield Boosters  (whether ancillary or otherwise), or Two Armor Repairers (whether ancillary or otherwise). You may fit as many or as few rigs to support the HP, resistances, or repair of your ship, this limitation only applies to HP addition or Active Repair modules.

-No Cloaking, ECM drones, targeted or un-targeted ECM, or  Damps/Disruption of any kind.

-The Grid limitation will be a 50km Radius (100km Diameter) around the referee.

-If there is a no contest or draw situation after 5 minutes, the referee will make the call

-If there is a drone boat with no guns and no drones left, they lose, so fit a gun.

-"Collapsing Grid"- The referee will call "Time Limit Reached, Grid Collapsing" and will announce a new Arena limit / distance in fleet chat and comms, going down 5km every 30 seconds until the limit is 10km, someone dies or, if there is a call for ceasefire based on their view of a stalemate, both burned guns, no ammo, etc, and stops the fight and scores the fight based on total HP remaining or the ability to hold tackle

-If the enemy warps off, the person remaining on grid becomes or remains King of the Grid, however no points will be awarded towards most kills or most consecutive kills. Fit a long point or scram.

Comments and rule change suggestions welcome, each iteration may result in permanent rule or per event basis rule changes.

If the event grows in sufficient number of participants, multiple grids can be fought simultaneously, with the following format.

2 to 3 tacs are used on the same grid, with an 'enhanced' referee boat, able to lock at 150 km or more. Each Arena's edge will touch the edge of the other arenas in this case, or in the case of a higher lock range, a further distance between them is possible, provided an MTU or Mobile depot is placed for each arena as the center point.

The changes to the format essentially reduce the qeue for the "King's Grid" by making the side arenas host 1v1 matches at the same time, so that players do not have to wait without any fights or action. The winners of these initial 1v1s will then wait for their turn on the main arena, and gain a point towards the consecutive kills number, or towards consecutive kills if they do dethrone the king in the main arena.

Recommended to have 1 "Side Arena" if the qeue is over 4 players, and 2  side arenas if there are more than 10 in line at once. 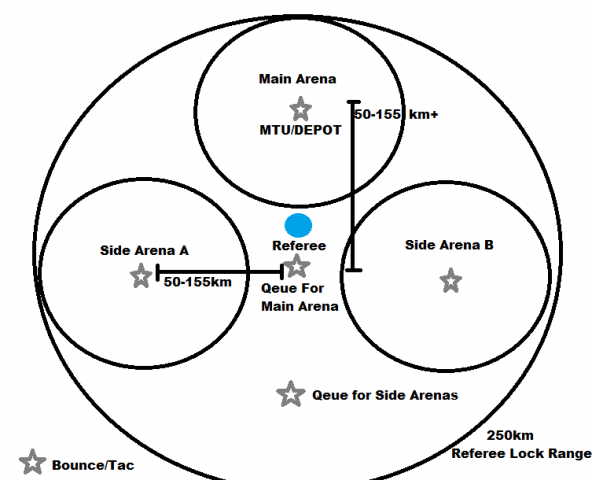 Back to Events and Contests